Hadoop is an open-source framework from Apache that allows to store and process big data in a distributed environment across clusters of computers using simple programming models.

The primitive features of Apache Mahout are listed below.

The algorithms of Mahout are written on top of Hadoop, so it works well in distributed environment. Mahout uses the Apache Hadoop library to scale effectively in the cloud.

Foursquare helps you in finding out places, food, and entertainment available in a particular area. It uses the recommender engine of Mahout.

What is Machine Learning?

Machine learning is a branch of science that deals with programming the systems in such a way that they automatically learn and improve with experience. Here, learning means recognizing and understanding the input data and making wise decisions based on the supplied data.

It is very difficult to cater to all the decisions based on all possible inputs. To tackle this problem, algorithms are developed. These algorithms build knowledge from specific data and past experience with the principles of statistics, probability theory, logic, combinatorial optimization, search, reinforcement learning, and control theory.

The developed algorithms form the basis of various applications such as:

Machine learning is a vast area and it is quite beyond the scope of this tutorial to cover all its features. There are several ways to implement machine learning techniques, however the most commonly used ones are supervised and unsupervised learning.

Recommendation is a popular technique that provides close recommendations based on user information such as previous purchases, clicks, and ratings.

Classification, also known as categorization, is a machine learning technique that uses known data to determine how the new data should be classified into a set of existing categories. Classification is a form of supervised learning. 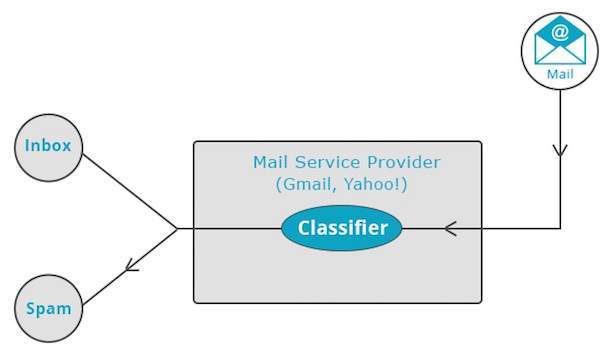 Clustering is used to form groups or clusters of similar data based on common characteristics. Clustering is a form of unsupervised learning.

The clustering engine goes through the input data completely and based on the characteristics of the data, it will decide under which cluster it should be grouped. Take a look at the following example.

Our library of tutorials contains topics on various subjects. When we receive a new tutorial at TutorialsPoint, it gets processed by a clustering engine that decides, based on its content, where it should be grouped.

This chapter teaches you how to setup mahout. Java and Hadoop are the prerequisites of mahout. Below given are the steps to download and install Java, Hadoop, and Mahout.

It is recommended to create a separate user for Hadoop to isolate the Hadoop file system from the Unix file system. Follow the steps given below to create a user:

Java is the main prerequisite for Hadoop and HBase. First of all, you should verify the existence of Java in your system using “java -version”. The syntax of Java version command is given below.

It should produce the following output.

If you don’t have Java installed in your system, then follow the steps given below for installing Java.

Then jdk-7u71-linux-x64.tar.gz is downloaded onto your system.

Generally, you find the downloaded Java file in the Downloads folder. Verify it and extract the jdk-7u71-linux-x64.gz file using the following commands.

To make Java available to all the users, you need to move it to the location “/usr/local/”. Open root, and type the following commands.

For setting up PATH and JAVA_HOME variables, add the following commands to ~/.bashrc file.

Now, verify the java -version command from terminal as explained above.

After installing Java, you need to install Hadoop initially. Verify the existence of Hadoop using “Hadoop version” command as shown below.

It should produce the following output:

If your system is unable to locate Hadoop, then download Hadoop and have it installed on your system. Follow the commands given below to do so.

Follow the steps given below to install Hadoop 2.4.1 on your system.

You can set Hadoop environment variables by appending the following commands to ~/.bashrc file.

Now, apply all changes into the currently running system.

In order to develop Hadoop programs in Java, you need to reset the Java environment variables in hadoop-env.sh file by replacing JAVA_HOME value with the location of Java in your system.

Given below are the list of files which you have to edit to configure Hadoop.

The core-site.xml file contains information such as the port number used for Hadoop instance, memory allocated for file system, memory limit for storing data, and the size of Read/Write buffers.

The hdfs-site.xml file contains information such as the value of replication data, namenode path, and datanode paths of your local file systems. It means the place where you want to store the Hadoop infrastructure.

Let us assume the following data:

Note: In the above file, all the property values are user defined. You can make changes according to your Hadoop infrastructure.

This file is used to configure yarn into Hadoop. Open mapred-site.xml file and add the following property in between the <configuration>, </configuration> tags in this file.

This file is used to specify which MapReduce framework we are using. By default, Hadoop contains a template of mapred-site.xml. First of all, it is required to copy the file from mapred-site.xml.template to mapred-site.xml file using the following command.

Open mapred-site.xml file and add the following properties in between the <configuration>, </configuration> tags in this file.

The following steps are used to verify the Hadoop installation.

Set up the namenode using the command “hdfs namenode -format” as follows:

The expected result is as follows:

The following command is used to start dfs. This command starts your Hadoop file system.

The expected output is as follows:

The following command is used to start yarn script. Executing this command will start your yarn demons.

The expected output is as follows:

The default port number to access hadoop is 50070. Use the following URL to get Hadoop services on your browser. 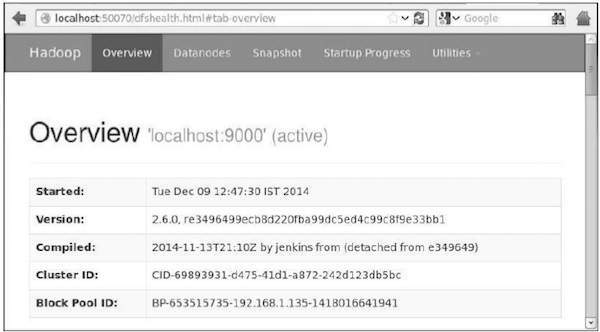 Step 5: Verify All Applications for Cluster

The default port number to access all application of cluster is 8088. Use the following URL to visit this service. 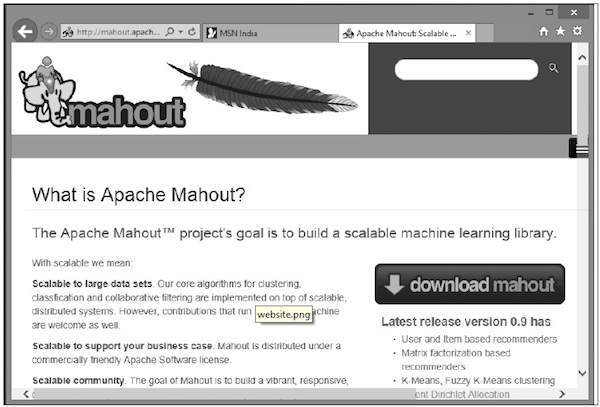 Then mahout-distribution-0.9.tar.gz will be downloaded in your system.

Browse through the folder where mahout-distribution-0.9.tar.gz is stored and extract the downloaded jar file as shown below.

Given below is the pom.xml to build Apache Mahout using Eclipse.

This chapter covers the popular machine learning technique called recommendation, its mechanisms, and how to write an application implementing Mahout recommendation.

Ever wondered how Amazon comes up with a list of recommended items to draw your attention to a particular product that you might be interested in!

Suppose you want to purchase the book “Mahout in Action” from Amazon:

Along with the selected product, Amazon also displays a list of related recommended items, as shown below.

Mahout has a non-distributed, non-Hadoop-based recommender engine. You should pass a text document having user preferences for items. And the output of this engine would be the estimated preferences of a particular user for other items.

Consider a website that sells consumer goods such as mobiles, gadgets, and their accessories. If we want to implement the features of Mahout in such a site, then we can build a recommender engine. This engine analyzes past purchase data of the users and recommends new products based on that.

The components provided by Mahout to build a recommender engine are as follows:

Here are the steps to develop a simple recommender:

The constructor of PearsonCorrelationSimilarity class requires a data model object, which holds a file that contains the Users, Items, and Preferences details of a product. Here is the sample data model file:

This object computes a “neighborhood” of users like a given user. There are two types of neighborhoods:

Here we are using ThresholdUserNeighborhood and set the limit of preference to 3.0.

Create UserbasedRecomender object. Pass all the above created objects to its constructor as shown below.

Step5: Recommend Items to a User

It should produce the following output:

Using Mahout, we can cluster a given set of data. The steps required are as follows:

To cluster the given data you need to –

Mahout works with Hadoop, hence make sure that the Hadoop server is up and running.

You can verify whether the directory is created using the hadoop web interface in the following URL – http://localhost:50070/

It gives you the output as shown below:

Now, copy the input data file from the Linux file system to mahout_data directory in the Hadoop File System as shown below. Assume your input file is mydata.txt and it is in the /home/Hadoop/data/ directory.

Mahout provides you a utility to convert the given input file in to a sequence file format. This utility requires two parameters.

Given below is the help prompt of mahout seqdirectory utility.

Step 1: Browse to the Mahout home directory. You can get help of the utility as shown below:

Canopy clustering is a simple and fast technique used by Mahout for clustering purpose. The objects will be treated as points in a plain space. This technique is often used as an initial step in other clustering techniques such as k-means clustering. You can run a Canopy job using the following syntax:

Canopy job requires an input file directory with the sequence file and an output directory where the clustered data is to be stored.

You will get the clustered data generated in the given output directory.

Each object will be represented as vector in space. Initially k points will be chosen by the algorithm randomly and treated as centers, every object closest to each center are clustered. There are several algorithms for the distance measure and the user should choose the required one.

Given below are some of the options of seq2parse utility. Create vector files using these options.

After creating vectors, proceed with k-means algorithm. The syntax to run k-means job is as follows:

K-means clustering job requires input vector directory, output clusters directory, distance measure, maximum number of iterations to be carried out, and an integer value representing the number of clusters the input data is to be divided into.

Classification is a machine learning technique that uses known data to determine how the new data should be classified into a set of existing categories. For example,

While classifying a given set of data, the classifier system performs the following actions: 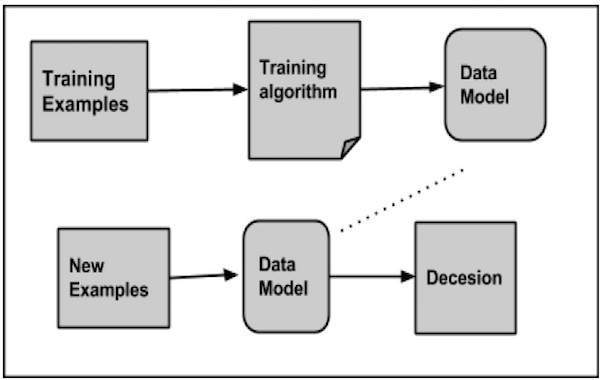 Naive Bayes is a simple technique for constructing classifiers. It is not a single algorithm for training such classifiers, but a family of algorithms. A Bayes classifier constructs models to classify problem instances. These classifications are made using the available data.

An advantage of naive Bayes is that it only requires a small amount of training data to estimate the parameters necessary for classification.

For some types of probability models, naive Bayes classifiers can be trained very efficiently in a supervised learning setting.

Despite its oversimplified assumptions, naive Bayes classifiers have worked quite well in many complex real-world situations.

The following steps are to be followed to implement Classification:

Generate or download the data to be classified. For example, you can get the 20 newsgroups example data from the following link: http://people.csail.mit.edu/jrennie/20Newsgroups/20news-bydate.tar.gz

Create a directory for storing input data. Download the example as shown below.

Create sequence file from the example using seqdirectory utility. The syntax to generate sequence is given below:

I am a C,C ,JAVA,Adobe Flex,.NET Programmer Currently working as a Software Developer
View all posts by ashokabhat →
This entry was posted in Uncategorized. Bookmark the permalink.